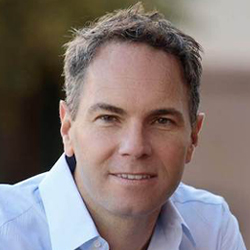 Chris Barton is the founder & first CEO of Shazam. He led the creation of the world’s first mobile music recognition service from concept and invention to commercial launch. Shazam has been downloaded almost 2 billion times and is one of the world’s most popular apps. It was purchased by Apple in 2018 for a reported $400 million, making it Apple’s 6th largest acquisition of all time.

Chris also spent eight years at Google where he created Android’s mobile carrier partnerships framework from scratch. Chris spent four years at Dropbox where he created their first mobile carrier partnerships. Prior to entering the world of technology Chris was a strategy consultant and earned two master’s degrees from Berkeley and Cambridge University.

An expert on the unique mindsets that lead to game-changing innovation, Chris has 12 patents including one found today within the Google search engine used by billions of people. He has invested in a variety of startups ranging from artificial intelligence for heart health to inflammatory disease therapeutics. Chris starred in a Superbowl TV ad featuring “mobile innovators” including Ray Kurzweil and the founder of Instagram. He now spends much of his time building his third startup company which will detect drowning in swimming pools using artificial intelligence.