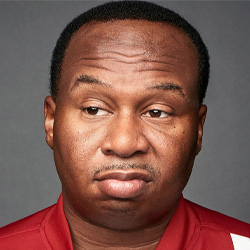 Roy Wood Jr. is an Emmy-nominated comedian, writer, producer, actor, radio personality, and podcaster primarily known for his stand-up comedy and work as a correspondent on Comedy Central’s The Daily Show since 2015.

He has executive produced several projects including the PBS documentary The Neutral Ground, an HBO MAX project 1% Happy, and also hosts the popular Roy’s Job Fair podcast where he explores the human condition every week through the prism of employment.

He recently co-starred alongside Jon Hamm in the feature film Confess, Fletch. Roy has also appeared on The Tonight Show Starring Jimmy Fallon, Late Night with Seth Meyers, The Late Show with Stephen Colbert, Conan, the Late Show with David Letterman and HBO’s historic Def Comedy Jam. He has also performed for the troops on numerous USO tours in the Middle East and the Pacific Islands.

Roy is a graduate of Florida A&M University with a B.S. in Broadcast Journalism. True to his roots, he is an outspoken advocate for reshaping the image of Alabama and the American South as a whole. In 2018, he penned a New York Times piece on the subject. He is actively working with the Birmingham City Council to bring more entertainment jobs to the state.